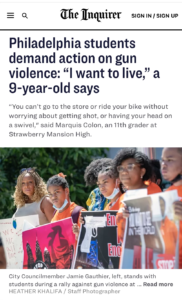 Here is an excerpt from an article in The Inquirer by Kristen Graham about the rally, held Tuesday, May 31, 2022, at City Hall:

Njemele Anderson, an English teacher at Mansion, was caught in the middle of a shootout leaving school this year — her car was trapped between two people shooting at each other. Anderson escaped harm. But the school has been rocked by gun violence, like so many across the city. Mansion student Kanye Davis, 16, was killed this year.

“You can’t even walk on the street,” said Marquis Colon, a Mansion 11th grader. “You can’t go to the store or ride your bike without worrying about getting shot, or having your head on a swivel.”

See the links below for additional media coverage of the rally:

Check out the latest news & updates

For the latest about what’s happening at Mansion, follow us on social media: